After watching the incredible displays of athleticism, perseverance and spirit during the 2016 ENDURrun last week, and then switching focus to the track and field competition at the 2016 Rio Olympics, we can’t help but draw parallels between the two, and especially to the multi-event sports of heptathlon and decathlon.

First, the obvious similarities. In multi-event competitions, women compete across seven events (100m hurdles, high jump, shot put, 200m, long jump, javelin, 800m) and men across ten (100m, long jump, shot put, high jump, 400m, 110m hurdles, discus, pole vault, javelin, 1500m), each over a number of days. Ultimates showcase the breadth of their talents in many disciplines of the sport of running, as they demonstrate their abilities over a range of distances, terrains and racing formats. In all cases, athletes constantly weigh fatigue and performance in future events/stages. The leading multi-sport athlete wears a yellow bib; the leading runner, a gold jersey.

But more than that, the athletes in these competitions display a similar camaraderie as ENDURrun Ultimates. Each deca/heptathlete is primarily competing against his or her own personal bests, to improve themselves, and they cheer and support each other as they succeed and empathize when they don’t. Through two days of contesting so many events together, they develop a bond that is unique to the multi-event competitions.

The women’s heptathlon concluded on August 13th, with Canada’s Brianne Thiesen-Eaton winning the bronze medal. After the final event, the entire field of 29 athletes lined up together to hold hands and acknowledge the crowds. It was a powerful moment, showing that although they are rivals, they are also friends. 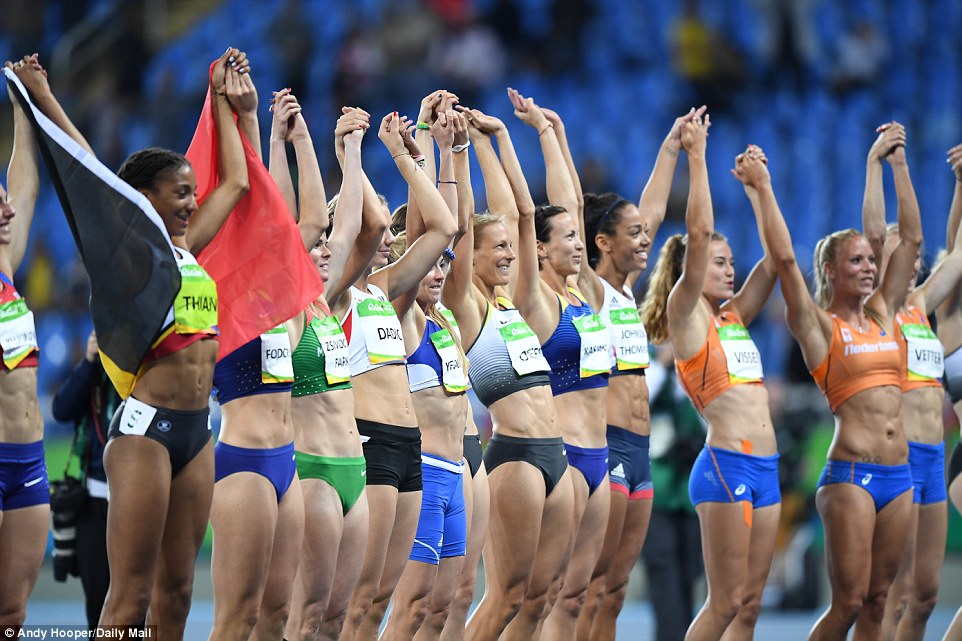 Remind you of anything?

The men’s decathlon concludes tonight with the javelin (5:35pm EDT) and 1500m (8:45pm EDT). After 7 events Canada’s Damian Warner is sitting in second behind defending Olympic Champion and world record holder Ashton Eaton of the USA – the husband of Thiesen-Eaton.

This same spirit of friendship was also showcased in the women’s 5000m heats when American and New Zealand runners Abbey D’Agostino and Nikki Hamblin tangled and fell in the middle of their race. Instead of immediately trying to catch up with the pack, both women took the time to help each other up and make sure the other was okay. This action earned them both a place in the final, scheduled to go off August 19th at 8:40pm EDT. D’Agostino sustained serious injuries to her knee such that she will not be able to compete; however, Hamblin is expected to be on the start line.

Who knows, maybe ENDURrun will make it to the Olympics one day …