Quietly, Nick But is putting together an incredible run at ENDURrun 2017.

Rob‘s Stage wins are appropriately grabbing the headlines this year, but Nick‘s performances this week are nothing short of awesome. After 5 Stages, Nick is cumulatively 20th all-time and he has a firm grip on the 2017 male Rookie award. We already knew that Nick is talented and well-trained, but how is our youngest 2017 competitor pulling this off?

If you’re looking for ENDURrun advice, recovery is no secret. He is quick to credit his coach, Sean Delanghe/Health + Performance, and some Ultimate mentors and teammates including Dave, Vicki, and Val as valuable resources. He has certainly felt soreness, but has developed and followed a strict routine including nutrition, rest, compression socks, but never any massage. So far, Nick has been pleasantly surprised by how much he recovers each day. He has also found the carefully designed ENDURrun week to be helpful, by balancing terrains and rest (the whole rest day was especially helpful), and he’s glad to now put the mountain Stages behind him. And at 23 years old, being in the 3rd percentile of all ever ENDURrunners by age, certainly doesn’t hurt!

Nick was swept up in ENDURrun hype in August 2016 when he became one of the first signups for ENDURrun 2017. It’s not hard to see why, as he was around for much of the week, captaining a Relay team, and running a spectacular 2:57 marathon. He admits that he wasn’t looking for motivation through signing up, but over the course of the year – through winter and injuries – having ENDURrun on the calendar has kept his training strong and focused. It wasn’t easy, but he never regretted it, and it’s showing why, now. He is already looking towards the Ultimate for 2018, but as he is graduating from the University of Guelph next April, he is wisely taking some extra time this year before deciding whether he will actually sign up. After an extended period without A races, Nick is excited to finally have the flexibility in his schedule to add some fast ones, including Fall 5 KM Classic or Road 2 Hope half marathon this fall. We know his fitness has come a long way and we’re looking forward to seeing his speed post-ENDURrun! 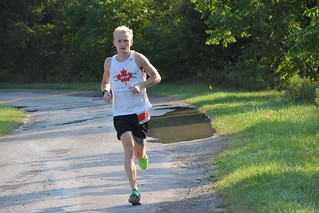