Unfortunately for Taylor Kelly, the answer to that question is clear: this is still too early.

When Taylor completed the 2016 ENDURrun, she signed up right away for 2017. But training didn’t go as planned this year, and when she sustained a concussion at the end of July, it all but ended her chances of completing the Ultimate. She is glad she gave it a try, but had no expectations about finishing the first Stage, let alone the entire week. (36 of the 380 ENDURrun Ultimate attempts – 9.5% – have ended in a DNF.) I informed Taylor that she now owns the lucky record for fewest kilometres run for the ENDURrun Ultimate: 3. She laughed, and noted that since her concussion, she is eager to start training for 2018, as soon as her doctor clears her to resume activity.

Lucky for us, her schedule as a teacher allowed her to still embrace the full week, even as she was forced to withdraw from the competition. More than previous years, this has allowed Taylor to embrace spectating and volunteering, and even though she would rather be running, she enjoys this new role very much. The rest of the volunteers do too!

ENDURrun is a family tradition for the Kellys; father Patrick and sister Hunter. Between the three, they have six Ultimate finishes and counting. So as Taylor plans her wedding for August 2018, ENDURrun will be a factor in date selection (Patrick is serious about this), even if it means that Taylor won’t be able to participate. Hunter as signed up, Patrick will today (!!), and Taylor is as motivated as ever to get healthy and back in the field. All the best for the upcoming year, Taylor! 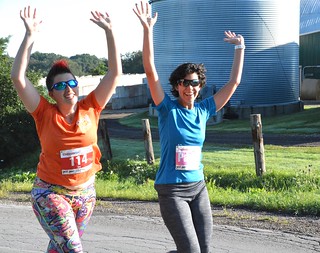