It’s fair to say that Wilf Goron has had a pretty rough two-year stretch.

Take a second to check out our all-time results, and enter the name “Wilf” into the search box. This alone tells quite a story. At first you can see that Wilf has run seven consecutive ENDURrun Ultimates, which is a record he shares with Jodi Kalman and Vicki Zandbergen. That alone is astonishing. But if you dig deeper into the times, you can see something even more amazing – Wilf’s rebound from his 2016 Ultimate time.

Rewind to February, when we announced that we would be strictly enforcing the time limits going forward. This sent some shockwaves through the community as the ENDURrun had been allowing times to exceed the cutoffs without penalty. Part of the solution was a compromise, where some limits were raised. To those affected, this was a big deal. Wilf would have been one of those individuals – except that he didn’t even know!

Back to that results page we showed you, and you can see Wilf’s progression over the years. A variety of injuries contributed to a lack of training that resulted in two years (2015 and 2016) that are substantially slower than his previous results. The newly interpreted rules meant that Wilf could not repeat these times, but Wilf had more intrinsic motivations to improve. Wilf got to work, as he had a phenomenally successful year training on a 3.6 mile loop 3-4 times per day. This week, he felt stronger every day, and by the time he became aware of the new limits and enforcement, the damage was already done. He able to knock well over four hours off his most recent Ultimate time (he doubled his goal of two hours)! We are currently researching this particular record, but this might be it. Wilf showed a year-to-year improvement that is unheard of.

Congratulations, Wilf. He’s already signed up for next year, so the streak will continue! 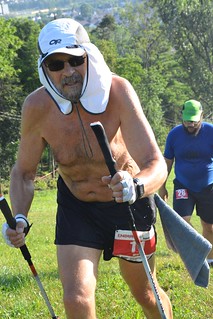