On the verge of his fourth Ultimate finish, never has his worldview been so simple. Running and personal health are two sides of the same coin, and Denis knows he’s successful if everything clicks for his main event – the ENDURrun Ultimate.

More than anything else, the camaraderie and community has helped to establish the event as an annual highlight – a “fitness vacation” – and Denis uses the event to set big, concrete personal goals. When he signed up in January 2017, it set in motion a larger plan. Seven months later, he has seen great success, and has lost about three-quarters of the way to his ideal race weight. Stage 7 will determine whether or not this year is his slowest ENDURrun, but even as injuries have gradually grinded him down over the years, he’s on the bounce-back and his outlook is rightly positive.

He credits Run Waterloo in general with helping to nurture his love of the sport. Denis has already committed to be back next year, and he has big plans to compete with his 2011 self (his fastest Ultimate). But for this fall, his eyes are squarely focused another longtime goal: the sub-20 5k. He has had varying degrees of success over the years, but his current PB – 20:21 from the 2010 Laurier Loop – has to go. If he can’t do it on his own, he is determined to get help, which will probably include joining Health + Performance!

These ambitious goals will make ENDURrun 2018 his best, ever, and we are super excited for it! 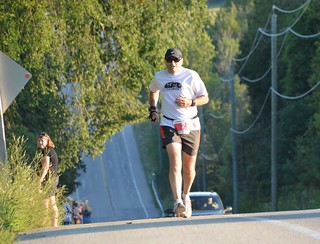