One of the early storylines of ENDURrun 2017 was the enforcement of time limits, the tweaking of some limits, and the resulting community debate.

In the months since, as 12:30pm on Tuesday, August 15 drew closer, not many people were more affected by that deadline than Michelle Barnes. Of the seven Stages, 3, 4, and 5 can be the tightest. Michelle Barnes has created two of the moments of ENDURrun 2017 with her finishes in Stages 3 and 4, coming in a combined 6:15 under the time limits. 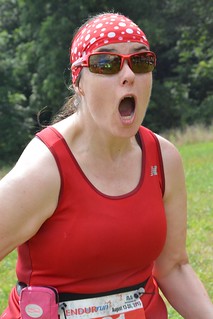 Michelle commutes over an hour each way during ENDURrun, so we conducted this interview by email. That gives us the opportunity, to publish in her own words, Michelle’s journey to this point and her outlook for this morning.

“I originally withdrew from the event because I had a knee injury and I knew that my breathing would not enable me to finish within the time limits. I didn’t want to force the volunteers to stay longer because of me, and I also was very prideful. I’ve never DNF’d, so why should I intentionally put myself in a situation where I was guaranteed one? I stopped running for a few months, and during that time my knee seemed to have healed. So did my pride and ego. I started running again and realized that a DNS is worse than a DNF and that I should just do what I could. So here I am, not worried about missing a time cutoff because that’s not what ENDURrun is about. It is about pushing yourself to your limit. It’s about finding out just how strong you really are, even when you think you can’t possibly make it. It’s about supporting each other and having your ENDURrun family believe in you even when you don’t quite believe in yourself. I am so incredibly glad that I decided to run the event anyway, even if I do spend every stage doubting myself. I don’t think I’ll make the cutoff on Friday because of the ski hills, but I will still do my best and will be proud of myself no matter how long it takes me. Besides, there is a huge advantage to coming in last – I get the biggest cheering section!

I want to thank all of the volunteers! It is so exciting to see who is at each aid station or who is marshaling various points along the course. Everyone is so enthusiastic and supportive. I also want to thank all of the other runners who tell me that I am doing a great job as they pass me; if I don’t verbally respond at the time it is because I am focusing on my breathing and can’t talk. I do appreciate the encouragement even if it doesn’t appear that way at the time.”

Michelle is currently halfway through her second lap here at Stage 5. Good luck! Update: Michelle made it in 7 minutes under the cutoff! How does she feel? “I’m shocked.” Congratulations!