Except all your friends are here!

As ENDURrun 2018 got off to a running start, it was a great mix of old and new.

If it ain’t broke…

Ditto: For the fourth consecutive year, Stage 1 played out the same: on the men’s side, Rob Brouillette sets a large lead; on the women’s side, a new member (Robyn Collins) joins the Golden Club; and in the Relay division, H+P storms to a lead.

Splash: One cool aspect of Stage 1 is that the race venue is close to RD Lloyd Schmidt’s home…and pool. As usual, runners gathered poolside for a refreshing conclusion to the morning.

Watch: We live-streamed most of the race on our YouTube channel. Thanks everyone for watching, asking and answering questions, and keeping us talking! See you again tomorrow!

Hello: Our 3rd highest total of 20 Rookies added great energy to the event this morning. We look forward to getting to know you this week! (With 49 starters, this is the second-highest field ever, after 2015.)

Henry made his first public appearance during the race! 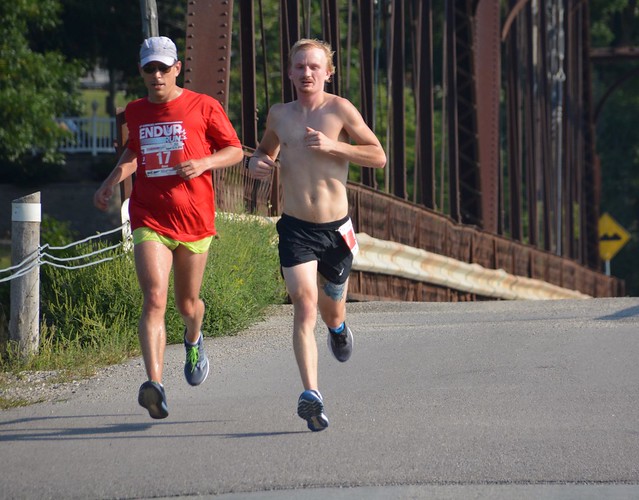 Robert ran a solid 1:17:32 and Rookie Robyn took gold with a 1:29:21. Both athletes have earned the right to start last in tomorrow’s time trial 15k, which means they start 1 minute behind their closest rival. Stage 2 is a flat out-and-back course.

Robyn Collins is the 23rd member of the Golden Club. https://t.co/imLzzK0njx pic.twitter.com/obHNvSjWgw

H+P Men’s A took top place in the Relay category with Brendan Hancock’s top performance. H+P had had the top 2 Relay teams after Stage 1 in each of the past 4 years.

Behind Robert, the two races to keep an eye on:

The women’s race was the most unpredictable of all. Gold jersey bearer Vicki Zandbergen finished fourth behind strong Rookie performances from Robyn and Lisa Leskien, and Valery Hobson who took 3 minutes off her 2017 time.

For Men’s 2nd Place, Rookies Aidan Rutherford and Dave Harmsworth came through the split with 2017 second place Nick Burt, and in the end, Dave took 2nd and Aidan 3rd.

Ian Grzegorczyk took over 6 minutes off his 2017 time.

Rebecca Kruisselbrink took off almost 15 minutes off her previous Stage 1 best in 2016!

Wilf Goron continues his epic comeback, taking over 22 minutes off his 2017 time, which was 40 minutes faster than his 2016 time! Is that even possible?

Also notable: Chris Battaglia pulled out a huge sprint to duck in 7 seconds under the cutoff! Glad to keep you in the field!

Barely a tenth of the way through this week’s mileage, runners have an opportunity to rest before the looming 15k Time Trial. The slist will be posted later this afternoon, but check out the 2017 start list for your own reference.