After 3 Stages, our leaders continue to defend their gold jerseys.

Robert Brouillette, the three-time defending champion, is expected to repeat this year. (No person has ever won four consecutive years.) With a half hour lead over Aidan Rutherford so far, his main battles are his own previous times and those of Charles Bedley of 2003 and 2004 vintage. Today, Rob’s time was the second-fastest ever, for the first time beating the 2003 Charles. Rob looked in control today and his six lap splits were the most consistent of his four attempts. Congratulations!

A slow first 2 stages but my legs got into their groove for this cross-country one.#ENDURrun #ENDURrob #OneToughRunner

Robyn Collins has looked good in gold in her Rookie campaign, winning the first three Stages outright. However, her lead after Stage 3, 2:01, is the lowest ever lead at this point (2:50 in 2008). Valery Hobson has finished second in each Stage and her final three laps today closed over 2 minutes to finish less than one minute back in Stage 3. And don’t forget 2017 Ultimate winner Vicki Zandbergen, sitting 15 minutes back with 93.9k remaining this week. Well done; this race is very exciting.

And the win for @RunnerRobyn, first words out of her mouth: “longest race ever!” pic.twitter.com/MyHmKTlp4C

H+P Men’s A continues to get it done, building their lead to over 29 minutes so far. This is the 3rd-fastest relay after 3 Stages ever. The H+P Women’s A team is the fastest-ever all-female team after Stage 3.

Matt Tribe is tied to the second with Thaddeus Homewood, who is 10 seconds behind his own 2017 time.

Rebecca Kruisselbrink is over 40 minutes ahead of her own 2017 time after Stage 3.

Maureen Pecknold, Maria Michel, and Sara Blanchett are all within 63 seconds. Maria is a rookie, and Maureen and Sara have 12 combined finishes between them!

Also of note is that Jack Kilislian has run more ENDURrun Stages than any other person – . This is also his tenth Bechtel – 300k over the past decade!

Check out the day in pictures with our sneak peek album: 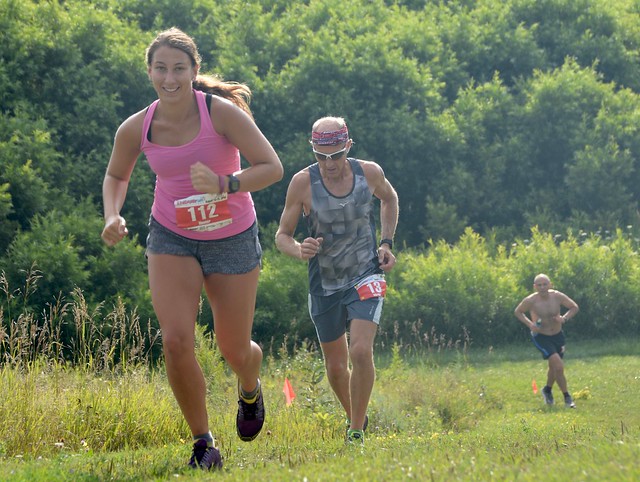